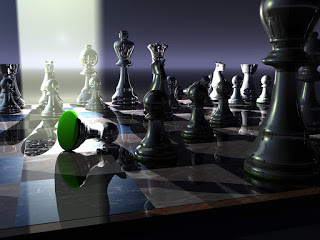 The poet, pointing to a finely wrought chess board before the king said, "Your Highness, if you place just one grain of rice on the first square of this chess board, and double it for every square, I will consider myself well rewarded." "Are you sure?"asked the king, greatly surprised. "Just grains of rice, not gold?" "Yes, Your Highness" affirmed the humble poet.

"So it shall be" ordered the king and his courtiers started placing the grain on the chess board. One grain on the first square, 2 on the second, 4 on the third, 8 on the fourth and so on. By the time they came on the the 10th square they had to place 512 grains of rice. The number swelled to 5,24,288 grains on the 20th square. When they came to the half way mark, the 32nd square, the grain count was 214,74,83,648 - that is over 214 crores. Soon the count increased to lakhs of crores and eventually the hapless king had to hand over his entire kingdom to the clever poet. And it all began with just ONE GRAIN of rice.